Measuring thermal energy transfers, “heating”, is difficult; it cannot be done with a single sensor because it is not a fundamental physical quantity, it is derived from others. Particularly, the transfer of thermal energy through a heating body, such as, for instance, a radiator, having as the means of transportation a heat-bearing fluid medium, such as water, is a function of the difference of the inlet and outlet temperatures and the flow rate of the medium through the radiator, i.e. the quantity of medium that passes in a unit of time (for instance, liters per second). Temperature (particularly with electronic sensors) and flow rate measurements are quite difficult; achieving high levels of accuracy is not trivial. The physical relationship representing the thermal energy released to the indoor environment (Q) through the heating body involves the three physical quantities (Ti inlet temperature, To outlet temperature, q flow rate) in this way (where c is the specific heat capacity of the fluid medium):

therefore, errors in the temperature and the flow rate are amplified when determining Q because of the multiplication between temperature and flow rate. For this reason, accuracies from 2% to 5% when measuring the thermal energy transfer are considered good and almost good respectively.

The instrument that should ideally be used for this type of measurement is vulgarly called a calorimeter or heat meter. It is the ideal device because it has three probes that measure the two temperatures and the instant flow rate. Its processor reads the signals from the three probes and combines them to retrieve thermal power and thermal energy in a desired time range (for instance, the current winter season or the previous ones independently). Nevertheless, this device cannot be used in buildings where the centralized heating hydraulic distribution circuit is of vertical type. These circuits are characterized by a number of pairs of warm (outgoing) and colder (returning) pipes along the verticality of the for each radiator on the same floor. In other words, every radiator on the same floor, sometimes just two of them, is connected to a distinct pair of vertical pipes. This type of fitting was used up to the ’70s and ’80s in residential buildings, in some countries even later, and it operates on every single radiator. It is not easy to transform the heating system from a centralized one to a functionally “autonomous” one. The two basic functions necessary for functional autonomy are thermostatic or electronic valves for each radiator, to set a desired indoor temperature independent of the flats on other floors, and a measurement device for each radiator, to allocate the heating expenses on the basis of the real thermal energy consumption in each flat.

On the other hand, the modern heating plant context is quite different. These heating systems use a so-called horizontal hydraulic distribution circuit, characterized by a single pair of vertical pipes for each apartment, and a star, or sometime loop, local horizontal circuit for each flat connected to the only vertical pair of pipes. In these modern, centralized heating systems, it is convenient and easy to install a heat meter in each flat at the junction of the vertical pipes and the local horizontal circuit.”. On the contrary, heat meters are very inconvenient and difficult to install on every radiator in vertical distribution circuits, for the following reasons:

This inability to use heat meters in a vertical central heating system confirms the so-called heat cost allocators as, essentially, the only technology for measuring heat usage in these cases for more than a century. In fact, in 1908 a company in northern Europe invented the first heat cost allocator, using an ampoule with a graduated scale and filled with colored water. The water evaporated more or less rapidly as a function of the temperature of the radiator on which the allocator was applied; at the end of the winter season, a company employee manually noted the level of the liquid in each allocator in the building to make the proper calculations and determine how to allocate the heating costs for each flat. Obviously every 3/5 years, the allocator was replaced because the ampoule became empty. The physical principle has not changed since then, what has changed most is the means by which the principle is realized. Today heat cost allocators are electronic devices with two temperature sensors, a battery, electronics and a small LCD display.

It is correct, at first, to argue in favor of this technology that should be considered glorious: more than a century of undisputed existence and about 150 million allocators in existence and running right now. It has allowed energy saving in degraded environments, acting both on the heating system structural and functional revamping and in inducing users’ behavioral change, by letting residents accept that there is a virtuous attitude that can save them money and pollute less, without sacrificing thermal comfort; indeed, in some cases, increasing it. That said, some questions are required: how reliable is the allocation of costs made using the allocators? After more than a century, do better technological alternatives exist or could they exist?

As already mentioned, the heat cost allocator does not directly measure the three fundamental physical quantities involved in the transfer of thermal energy. It measures indirect physical quantities, such as the surface temperature of the radiator at a specific point and the temperature of the surrounding air. In other words, the allocator measures the effects induced by the thermal transfer, not the thermal transfer itself. To calculate the allocation, these measures are then combined with the parameters that are supposed to represent the thermal characteristics of the radiator on which each allocator is installed. This indirect measurement, applied to real cases, which differ greatly from the ideal conditions used for the calibration of these devices, is a source of many problems that could nullify desired accuracy and reliability of the allocator. The following table summarizes some of them.

These considerations are just additional to the fact that a large part of the allocators’ low accuracy is inherently due to the type of measurement that is carried out, which refers to indirect physical quantities (the surface temperature of the radiator and the air that surrounds it) rather than to those directly involved in the thermal exchange. The promise of an error close to 5% is generally certified by the heat cost allocator manufacturers with tests on a single allocator/radiator, carried on in ideal working conditions in a so-called climatic chamber. A very different performance may be achieved once a complete system is installed in a real building. A very interesting rigorous experiment has been done by the University of Cassino, installing heat allocators in a building in which there were also mounted reference heat meters for each radiator. This research (link) found the typical errors of heat cost allocators to be around 9%, with 40% as the maximum.

EcoThermo solves all these problems in advance because, while not having to install a complete heat meter and flow sensor on each radiator, its measurements rely on the three fundamental physical quantities: the inlet and outlet temperatures and the water flow through each radiator. Furthermore, the calibration of EcoThermo, which, in the jargon of engineering of automatic controls, is called mathematical identification, is fully automatic and excludes the possibility of errors, which would rarely be detected, by the installer. The following graph illustrates qualitatively the accuracy of positioning of the four techniques mentioned in this article. The represented levels of error come from the trial conducted by the University of Cassino for heat cost allocators, techniques based on or derived by degree-days (it should be remembered that, in old buildings, the quality results could be much worse because of the phenomena listed above); those declared by manufacturers with respect to heat meters; the experiments conducted on the thermo-fluid-dynamic mock-up by the Polytechnic of Turin and INRIM for EcoThermo (link). 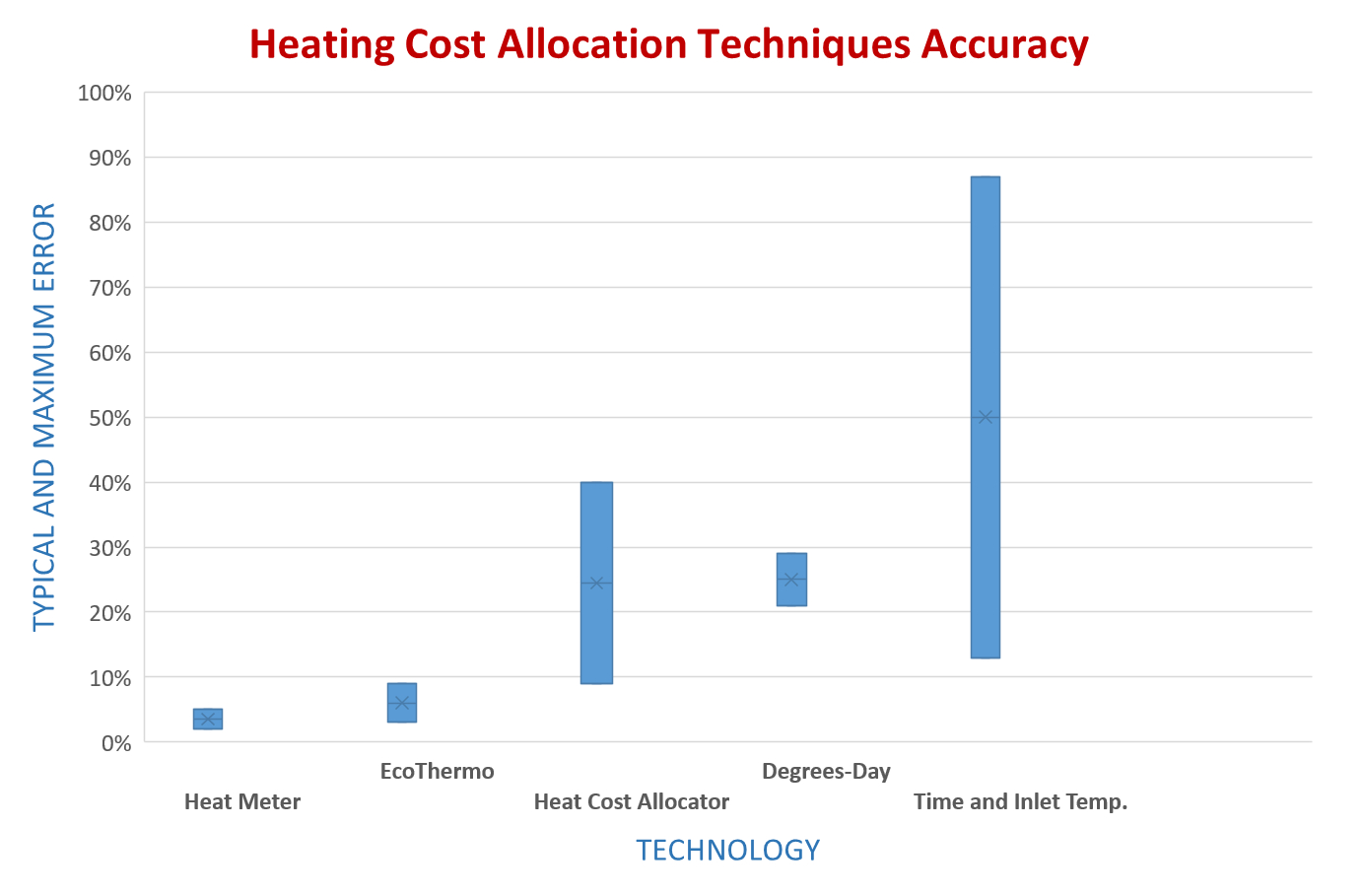 Finally, it should be highlighted that the technique based on heat cost allocators does not just have significant quality limits, it also has strong application limits which prevent their adoption in many cases.

EcoThermo is compatible with all these types of radiators.